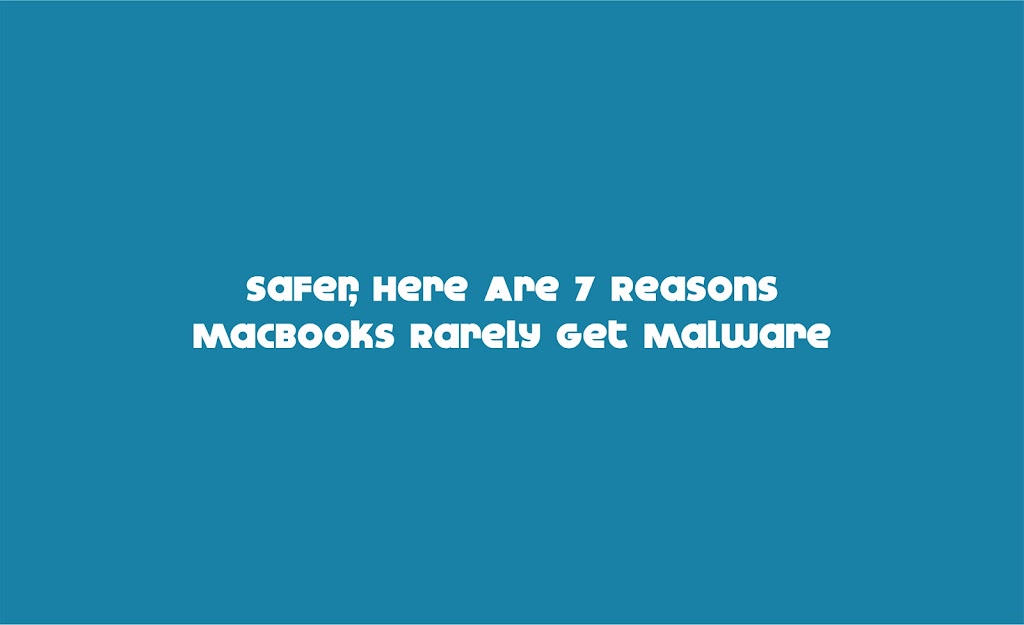 Malware stands for malicious software. As the name suggests, malware is designed to damage and destroy computers and computer systems. Some examples of common malware, including viruses, worms, Trojan viruses, spyware, adware, and ransomware.

Many people consider that MacBooks are immune to malware. Is this assumption correct? The answer is no. No system is perfect in terms of security so there is still a chance that a MacBook is infected with malware just like any other computer.

The good news is, MacBooks are less exposed to malware when compared to laptops in general. Why is that?

1. macOS is built with Unix platform

When developing Windows, Microsoft built an operating system on top of a software platform called MS-DOS. Instead, Apple developed macOS using Unix, an open-source platform that has been used for years.
Unix has the advantage of its stability and security, many of which are not present in MS-DOS. Unix is also open-source and has been used by a variety of different companies, such as for the development purposes of macOS, Linux, PlayStation 4, and even firmware for gadgets such as routers.
There are many parties who want to fix vulnerabilities in Unix so that it becomes more secure. Apple benefited from the efforts of this group, while Windows PCs depended solely on Microsoft’s architecture.

If you’ve ever downloaded an app from outside the App Store, you’ll find that it can’t be opened as soon as it’s finished downloading. This is one part of Apple’s security feature called Gatekeeper.
Gatekeeper automatically quarantines new apps and uses XProtect to scan for malware. If malware is found, Gatekeeper will warn you of the risks and won’t let you open the app.
In fact, even if the XProtect scan is clean again, Gatekeeper may reject the application if the developer is in doubt. By default, you’re only allowed to install apps from the App Store or identified developers.

macOS uses sandboxing to limit what an app can do. In simple terms, it prevents third parties from accessing other apps or system files on your device.
This is one of the main reasons why Apple-made computers are less flexible than those made in Windows, but these restrictions are certainly accompanied by tightened security. This restricts third-party apps’ access to core system files making it difficult for malware to cause damage even if it manages to bypass Gatekeeper.

macOS hides important system files on macBook so you won’t accidentally damage or move them. In addition, it also keeps important files behind hidden defenses, called System Integrity Protection (SIP).
SIP will prevent you or others from editing system files on macBooks, which are often the main targets of malware. This makes it difficult for malware to infiltrate the operating system and compromise the security or performance of macbooks.

5. MacBook users are much less than Windows laptops

Another fact why MacBooks are less exposed to malware is because the number of MacBooks on the market is much less than that of Windows laptops. Meanwhile, malware designed to damage Windows doesn’t work against macOS.
Thus, malware developers must choose which platform they are targeting to attack. Since there are so many more Windows laptop users, then malware creators prefer to attack the Windows operating system. There are fewer malware threats for MacBooks because there is much less advantage to the person who makes them.

To better protect its users, Apple uses a built-in security feature called the Malware Removal Tool (MRT) to scan MacBooks for and catch any malware that might escape XProtect. How the MRT works relies on a constantly updated set of definitions that help identify potential malware.
According to Apple, MRT removes malware after receiving the latest information, and continues to check for infections when restarting and logging in. Thus, the system suspected of malware cannot enter the system.

Another way that Apple does to keep its users safe across macOS and iOS devices is with the Notary app. It was created to run on Apple devices through a preliminary review before it can be distributed and sold outside the App Store.
When this review does not find any examples of malware, Apple will issue a Notarized ticket. The ticket was recognized in another part of macOS, Gatekeeper, which verifies the ticket and allows the app to be launched.
In addition, if a pre-approved application turns out to be malicious, Apple may revoke its Notarization and prevent the application from running.
Apple uses a variety of protections that make its devices naturally safer from malware attacks. However, in any case, the way users use MacBook also affects the security of this device. So, it’s best to keep your antivirus installed and scan your device regularly to make sure your MacBook is safe from malware.
See also  5 Leading Sector Infinix Note 12 (2023)
0 0 votes
Article Rating
Subscribe
Login
0 Comments
Inline Feedbacks
View all comments