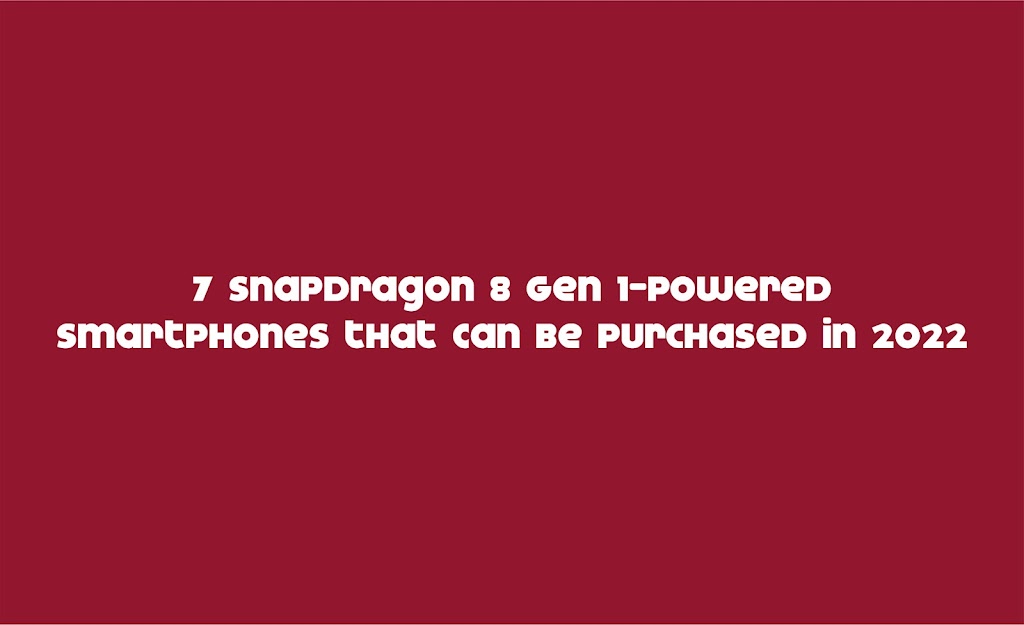 Reliable performance is one of the “mandatory features” in the latest mobile phones, especially for the highest-class mobile phones such as flagships. Of the many flagships available on the market today, not a few are powered by Snapdragon 8 Gen 1 – the latest chipset from Qualcomm.

This chipset is claimed to be able to run AI-based processes up to four times faster, in addition to offering up to 70 percent better power efficiency. If you are interested in what capabilities Snapdragon 8 Gen 1 has, here are the 7 best smartphones powered by Snapdragon 8 Gen 1 to buy in 2022.

Samsung Galaxy S22 Ultra may not be the first smartphone to be equipped with Snapdragon 8 Gen 1, but it is definitely one of the most popular. Along with that latest generation chipset from Qualcomm, the Galaxy S22 Ultra also packs 8/12GB RAM, 128/256/512GB or 1TB storage and a 5,000mAh battery with 45W fast-charging.
The screen is 6.8 inches with a 2X Dynamic AMOLED panel, QHD+ resolution and a 120Hz refresh rate. With the same “box” body design as the Galaxy Note series, Samsung also equips the Galaxy S22 Ultra with a built-in stylus, namely the S Pen.

OnePlus always provides the best specs for their flagship HP and the OnePlus 10 Pro is no exception. The phone, which was introduced earlier this year, is powered by Snapdragon 8 Gen 1 along with 8/12GB RAM, 128/256/512GB storage and a 5,000mAh battery with 80W fast-charging support.
For the screen, the OnePlus 10 Pro carries a 6.7-inch QHD+ 120Hz Fluid AMOLED display with LTPO 2.0 technology for a more flexible refresh rate. Not only that, this phone also has an IP68 rating for water / dust resistance, wireless charging support and an “Alert” slider button to quickly switch to silent mode.

Xiaomi Mi 11 Pro became one of the first smartphones to be armed with Snapdragon 888 and Xiaomi 12 Pro followed in the same footsteps by becoming one of the first smartphones to use Snapdragon 8 Gen 1 as the main kitchen runway.
In addition to the latest chipset, this smartphone is also equipped with 8/12GB Ram, 128/256GB storage and a 4,600mAh battery with 120W fast-charging which is claimed to be able to charge from 0-100 percent in just 18 minutes. The screen is also one of HP’s main selling points where the 6.73-inch screen it carries uses an AMOLED panel, with a QHD + resolution and a refresh rate of 120Hz.

After being released exclusively in China in January, the Realme GT2 Pro was finally launched for the global market and brought the same impressive specifications. This mobile phone with a minimalist but elegant design is powered by Snapdragon 8 Gen 1, along with 8/12GB RAM, 128/256/512GB storage and a 5,000mAh battery with 65W fast-charging.
The screen has a spacious 6.7-inch size but is still comfortable to hold, with a QHD + resolution and a refresh rate of 120Hz. Just like the Samsung Galaxy S22 Ultra, the GT2 Pro screen has also used LTPO 2.0 technology.

In recent years, Motorola has slowly but surely begun to return to the flagship mobile phone market and the Edge Plus (2022) is the latest. Armed with Snapdragon 8 Gen 1, this smartphone also packs 8/12GB RAM, 128/256/512GB storage and a 4,800mAh battery with 68W fast-charging.
For maximum user satisfaction, this smartphone also carries a 6.7-inch OLED screen with FHD + resolution and a refresh rate of 144Hz. Interestingly, this smartphone has different names in a number of regions such as the Edge 30 Pro in the Asian, European and Latin American markets and the Edge X30 in the Chinese market.

In accordance with many people’s expectations for mobile phones made by OPPO, Find X5 Pro also offers a combination of premium designs with qualified specifications. One of the main selling points of this smartphone is a ceramic-coated rear body that makes it able to have the best durability and premium impression.
Along with a luxurious body, Find X5 Pro is also equipped with Snapdragon 8 Gen 1 (or Dimensity 9000 for the Chinese market), 8/12GB RAM, 256/512GB storage and a 5,000mAh battery with 80W fast-charging. The screen is 6.7 inches with QHD+ resolution, 120Hz refresh rate, AMOLED panel and LTPO 2.0 technology.

If the row of mobile phones above is a cellphone for casual use, then Nubia Red Magic 7 is somewhat different because it is made for gaming needs. Just like the others, The Red Magic 7 is armed by Snapdragon 8 Gen 1 as the main runway kitchen, in addition to 8/12/16GB, 128/256/512GB storage and a 4,500mAh battery with 65W fast-charging.
For the screen, this phone carries a 6.8-inch FHD+ AMOLED screen with a high refresh rate at 165Hz. Like gaming phones in general, Red Magic 7 also has several built-in cooling fan gaming features and a pair of shoulder or trigger buttons.
See also  7 Best HDDs and SSDs for Extra Storage on PS5
0 0 votes
Article Rating
Subscribe
Login
0 Comments
Inline Feedbacks
View all comments