Skip to content
Home » 6 New WhatsApp Features That Are Interesting to Try, What Are They? 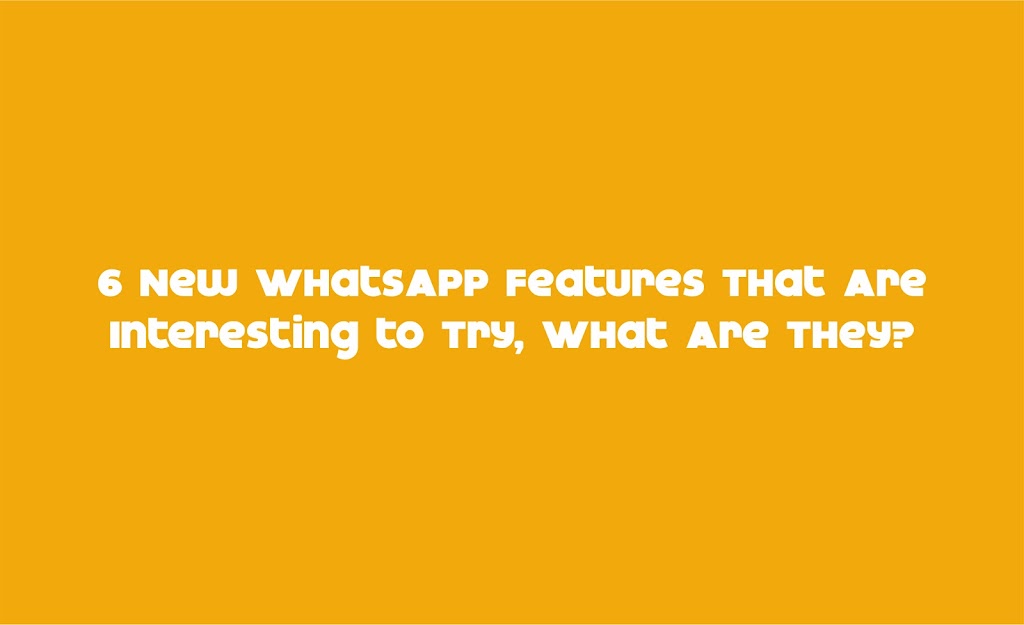 Being the prima donna of the Indonesian chat application, WhatsApp continues to develop innovations by providing the best service. Well, entering the end of the second quarter of 2022, WhatsApp has again released a new feature. You can enjoy this after making updates.

WhatsApp’s new features include calling, messaging, and other facilities that make it easier for you to connect with others, both individually and in groups. What are the features, heck?

The excellent features of WhatsApp provide convenience for its users. Based on Statista’s report, the number of active WhatsApp users reaches 2 billion people, you know. This makes this application with the phone logo claimed to be the instant messaging service with the most users in the world.
Knowing its potential, WhatsApp then launched a feature that supports large capacity management. In addition, WhatsApp is also able to support remote work and collaboration which is generally done through social media. Enough with the new WhatsApp feature, you can make calls, chats, to work conferences.

Knowing that the application is used as a means of group communication, WhatsApp then introduced a new feature called community. At first glance, this feature is similar to a group, but there is actually something different. One of them is a sub-group in one community. For example, you can group friends by committee in multiple chat rooms in one community.
The existence of this community feature allows admins to broadcast to all community members and members of certain groups. Admins also have the authority to control messages in chats by deleting messages. In addition, all members of the community can make video calls with 82 people. Reported by Prestige, this feature was introduced in April 2022 and is expected to be released in the same year. Be patient first, yes!

First introduced in 2013, voicemail became an alternative messaging option that clarified conversations and reduced the risk of miscommunication. Simply by pressing the button, you can convey a voice message to the recipient of the message.
Well, this feature is constantly being developed by WhatsApp. Launched in March 2022, the voice mail feature is now getting updates, namely:
See also  5 Cheapest Wireless Gaming Mouse Recommendations in 2022

Not just voicemail, WhatsApp also presents an upgraded version of voice calls. This feature complements the needs of calls between individuals and groups. Arbitrary?

A new feature of WhatsApp was also released to enliven messages. In the chat room, you will find a number of services that did not exist before, such as:

Want to hide the background during a video call? Now you don’t have to struggle to find a neat and quiet place. Simply change the background to cover the back during a video call. Here’s how:
See also  7 Snapdragon 8 Gen 1-Powered Smartphones that Can Be Purchased in 2022
Unfortunately, this new feature of WhatsApp has only appeared in certain types of cellphones. One of them is Samsung Galaxy which supports One UI 3.1 and some compatible iOS devices. WhatsApp itself has not announced when this feature can be widely accessed by other users.

For those of you who have trouble moving chat history to a different type of mobile phone, this is no longer the case. Because, the new WhatsApp feature has supported chat transfers between operating systems. Including chat history, photos and videos, to files in the chat.
If previously it was limited from iOS to Android, now users can do the opposite. Just download the Move to iOS app that you can enjoy for free. Make sure your phone is running Android version 5 and above and iOS version 15.5.
To transfer data, simply connect the two devices, then select WhatsApp and grant access. Furthermore, the file transfer will be carried out automatically.
What do you think about this new feature of WhatsApp? Interesting, isn’t it? Make sure your phone is compatible so that you can enjoy this new WhatsApp feature.
0 0 votes
Article Rating
Subscribe
Login
0 Comments
Inline Feedbacks
View all comments