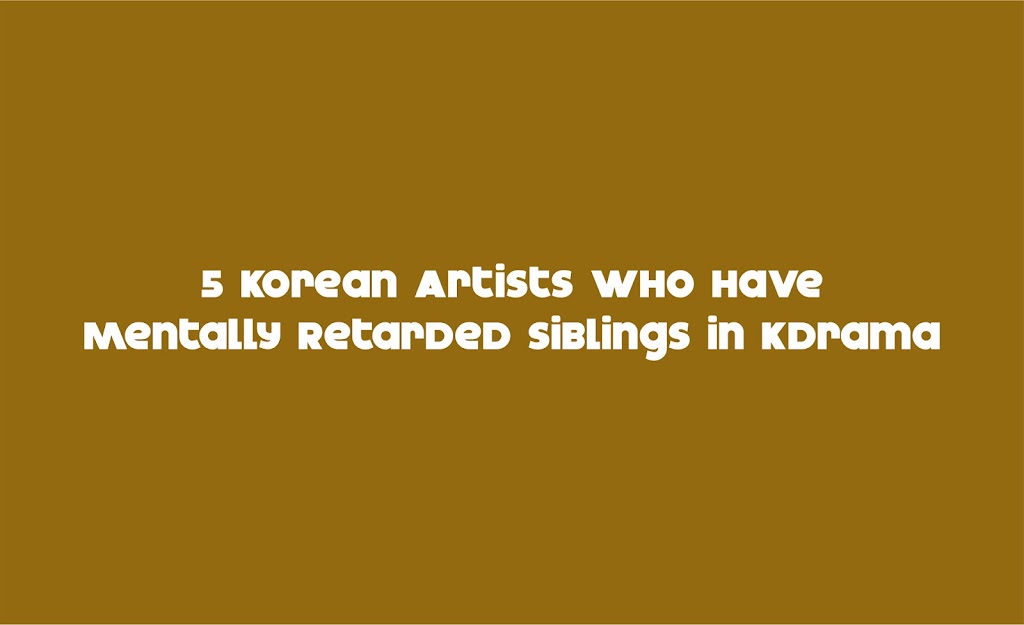 In addition to the story of lovers, Korean dramas also tell about the affectionate relationship between family members. But what’s even more interesting is that Korean dramas often present storylines to unexpected characters, so the audience is curious about the story. One of them is that the character told has mental retardation.

Mental health itself has often been made into stories in several KDrama. In addition to the heartwarming story, KDrama connoisseurs also get a moral message from the story. Here are five Korean artists who are told to have brothers with mental retardation in KDrama.

In KDrama Brilliant Legacy (2009), Eun Sung (Han Hyo Joo) who has just returned from New York has to face the fact that his father’s company goes bankrupt. This also makes him and his sister, Eun Woo (Yeon Joon Seok) have to leave the house. Seba, her father was reported to have died while her stepmother seemed to be hands off to them.
When Eun Sung struggled to survive, her sister Eun Woo disappeared. Eun Sung, who loves her sister very much, also starts doing various ways so that Eun Woo can come back. Moreover, Eun Woo, who has mental retardation, worries her brother even more.
Assisted by several people, it makes it easier for Eun Sung to find Eun Woo. Luckily Eun Woo is with someone who treats her well. The café owner who found Eun Woo decided to hire him as a song accompaniment at the café. Plus Eun Woo also likes music and piano very much.

The drama Catch The Ghost (2019) which is a mystery thriller genre is not only about the disclosure of a murder case. Because, there is a heartwarming story of the main character that has succeeded in attracting attention.
It is told that Yoo Ryeong (Moon Geun Young) has a twin brother named Yoo Jin (Moon Geun Young). Because his twin brother is mentally retarded, Yoo Ryeong has to have a hard time. Once Yoo Ryeong also deliberately left Yoo Jin on the train.
After losing Yoo Jin, Yoo Ryeong only realized that he turned out to be very fond of his twin brother. He then looked for a way to find his brother. He even managed to become a policeman in the subway section which he considered to be the right way to quickly find Yoo Jin.

After losing his father in the drama Move To Heaven (2021), Han Geu Ru (Tan Jun Sang) who has asperger’s syndrome now has to live alone with his uncle Cho Sang Gu (Lee Je Hoon). It is known, that his uncle has just been released from prison and is now the legal guardian of Han Geu Ru.
After the death of his father, Han Geu Ru still kept the service of cleaning valuables and also the property of a deceased person. Not alone, he was also accompanied by his uncle.
Originally, Cho Sang Gu was indifferent to Han Geu Ru. However, once he saw that this Han Geu Ru was very special. Because, behind his asperger’s syndrome Geu Ru even has advantages such as being able to remember various things in detail. Finally, the uncle’s heart began to move and in the end Cho Sang Gu began to take care of Han Geu Ru and began to love his nephew.

Having mental retardation is not an obstacle for Moon Sang Tae (Oh Jung Se) to become his older brother, Moon Gang Tae (Kim so Hyun) in the drama It’s Okay To Not Be Okay (2020). Just living alone, making the siblings protect each other.
Moon Sang Tae’s childhood trauma that could appear at any time made Moon Gang Tae have to take extra care of his brother. Moon Gang Tae himself works as a nurse in a psychiatric hospital, so he knows more and more what to do if his brother suddenly remembers his trauma.

Young Ok (Han Ji Min) who feels that her twin is a burden in the drama Our Blues (2022) makes her want to go away from her brother. She finally decided to leave her brother under the pretext of looking for a job on Jeju Island.
One day, Young Hui (Jung Eun Hye) decides to catch up with her sister on Jeju Island, making the two meet again. Young Ok actually loves his brother. However, because of her brother’s condition, Young Ok often finds it difficult, so she also thinks about not getting married and living alone with her twin.
From some of the stories above, it seems to tell that no human being is perfect. In every shortcoming there must also be an excess in a person.
0 0 votes
Article Rating
Subscribe
Login
0 Comments
Inline Feedbacks
View all comments